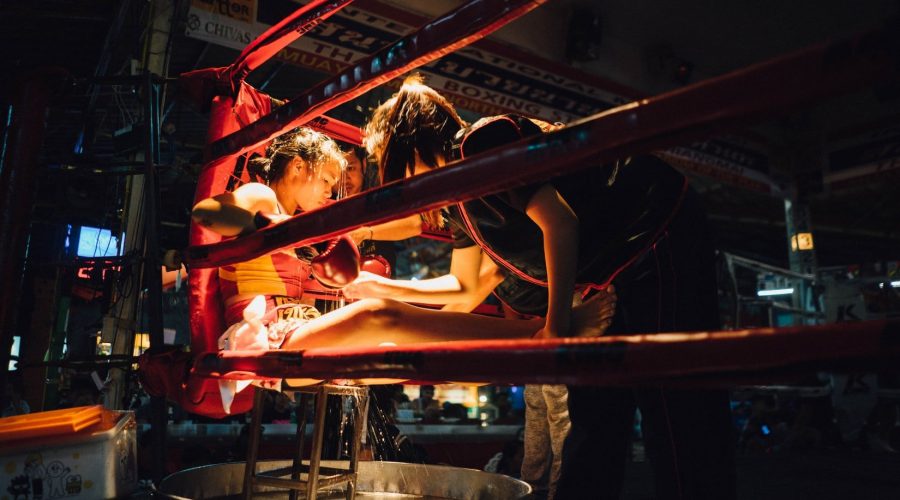 Difference Between Muay Thai and Kickboxing

Muay Thai and Kickboxing — these two martial arts, or sports, have seen a remarkable rise in popularity recently. However, people often confuse the two and are unsure of which one to choose when seeking out for a new sport or way to keep fit. Admittedly, to people who are not too well versed in the world of martial arts, they have their similarities. Many of the martial arts are actually umbrella terms that encompass hundreds of individual styles. Many Mixed Martial Arts (MMA) players play both, and the two have commonalities in techniques and training. On the other hand, there are many striking differences between Muay Thai and Kickboxing that should not be overlooked when comparing the two.

Let’s look at the similarities first

Both Muay Thai and Kickboxing are very strategic. They both use punches, kicks, strategic foot work and distancing. There are also effective defence against striking attacks by an opponent. On this fundamental level, the two are almost identical. Both are fine striking martial arts that have been proven to be effective at the highest levels of competition.

Both of them are full-contact competitive sports, so there are definitely health risks involved. When it comes to professional Muay Thai fights, they can definitely seem a bit hardcore and brutal, or even bloody. However, most Muay Thai and kickboxing practitioners do not compete at the professional level. They are mostly for fitness, health or leisure purposes. At the end of the day, the level of danger and risk is all flexible and up to your needs. There are definitely studios that provide an array of lessons at different levels.

The most apparent difference is in terms of the striking system in a match. Kickboxing is a 4-point striking system that involves kicks and punches only. It usually takes three, three-minute rounds for a match. Muay Thai is an 8-point striking system that involves elbows, knees and upper body grappling, in addition to kicks and punches. It traditionally is five, five-minute rounds of striking. This system in Muay Thai is also known as “The Art of Eight Limbs”. However, certain organizations that hold Kickboxing matches do allow knees. There are many other differences in scoring system and striking limits which may be too technical to delve into here.

If you watch a Muay Thai match and a Kickboxing, you will quickly realize some differences in the way the fighters move and attack. In Muay Thai, fighters are moving primarily forward. This is partially because fighters are usually taught to bide time until the opponent gives them an opening. There is relatively less head movement, weaving and circling. In Kickboxing, kickboxers are usually more fluid and defensive. They use more footwork and angles in setting up their attacks, rather than relying on aggressive forward motion.

The types of strikes are also quite different. In Muay Thai, there are much less stylized or exotic strikes. More simple and powerful strikes are preferred since they do not throw players off balance if they miss. Therefore, their strikes have to be more aggressive and powerful. However, for Kickboxing, there is a much wider range of strikes. Some may be more difficult and run the risk of losing balance if one misses.

As mentioned earlier, kickboxing fights are three rounds, while Muay Thai fights are five. This also affects the pacing of the matches. In Muay Thai, the first two rounds do not matter too much, and are often called the “feeling out” process. The fighters only engage more seriously more towards the end.

In terms of their origin and cultural roots, they are also very different. Muay Thai, also called “Thai Boxing”, is (obviously) originated in Thailand. It has a history that dates back to several hundreds of years to when Thailand was a battle warring nation. Muay Thai was essentially a battle art for when soldiers lost their weapons and had to rely on their limbs for survival and combat. Because of its rich history, there are a lot of cultural and spiritual practices embedded into the sport. Respect is very important in Muay Thai, as reflected by the “Wai Kru”, which is a pre-fight ritual to pay respect to the fighters’ masters and others who have helped them in preparing the fight. Fighters traditionally wear a Mongkol (headband) and Prajioud (armband) which also have deep spiritual meaning.

On the other hand, no such traditions can be found in Kickboxing. In fact, it was developed in Japan when managers of Thai boxers were inspired by Muay Thai. It was then passed on to the United States, and entered the mainstream. Today, it is more of an umbrella term, which refers to all kicking and punching arts, or a hybrid combat sport. Some kickboxers perform the Wai Kru pre-fight, but it is mostly by Thai fighters that have transitioned into Kickboxing. However, there are more specific Kickboxing styles, such as American Kickboxing, Dutch Kickboxing, GLORY Kickboxing and Chinese Kickboxing. They all have more specific styles when it comes to rules, restrictions, and pacing.

Which one should I choose?

In short, both Muay Thai and Kickboxing are highly efficient martial arts – some may even say they are the best two striking martial arts available. Even though they have several key differences, they are fundamentally similar if you just want to look for a new type of sport for a challenge. You should always try out more different styles and figure out which ones suit you better!

Check the best Muay Thai and Kickboxing classes in Hong Kong on Enrolla!

If you are having any questions, please feel free to ask.

Drop Us a Line